Over the last two weeks, I have been working from our RV, while my husband was busy working away from home. During these internet-phone free times, I get to thinking and exploring, both of which usually lead to spending money. This time I got to thinking about, how I should have brought my Mothers-in-Law cast iron dutch oven with us for roasting chicken and pork in for lunches. Well, that led to me hopping in the pickup and heading down the road to visit a local man, who sells cast iron cookware from a carport. I knew what I was looking for and sacrificed a few presidents to the elderly gentleman’s pocket.

Back at the handy Hideout RV; out came a small bottle of organic vinegar to first clean all the dirty cooking oil from the new-old dutch oven, this with a scouring pad and a little dish soap works excellent to cut old sticky vegetable oil off cast iron. Next came a good rub of olive oil and the dutch oven was ready to go to work. Now I had to decide where and how I was going to store my new tool – fortunately, my RV has a low cabinet that is perfect for my heavy and growing collection of cast iron. Now home is another story, and the numbers of cast iron tools are growing here as well. This summer I plan on making a few small changes to my kitchen, and one change may include a way to display and store our favorite family cookware.

Cast iron pieces are as much about function as they are about form: Often, people, admire a well-worn cast iron skillet as much as, say, a brand-spanking’ new car. So it should come as no surprise to hear that showing off your cast iron collection is a genre all of its own. “Instead of hiding your cast iron in a cabinet, consider showing off your collection,” a long time friend said to me. This was after her intervention on “stop it” when I commented on buying not one but two new pans. Her thought is, if I see all the skillets, and have to dust those not in regular use, it will curb our enthusiasm for more. hmmm

For me, cast iron is the first and perfect non-stick cookware. And somehow it feels all American.

Where did it start?

Cast-iron vessels have been used for cooking for hundreds of years. Ancient China, around 513 B.C., is the earliest known development and use of cast iron. It was the Chinese who invented furnaces capable of producing the intense heat required to melt and work iron. Cast iron was so valuable during the medieval age that it was bequeathed in wills, and listed as part of the estate’s assets. One of the very first manufacturing industries in North American was the production of cast iron cookware. The Lodge Manufacturing company is currently the only major manufacturer of cast iron cookware in the United States; the rest are made in Asia or Europe.

Now that brings me to a small story on the Wagner, Griswald brands of cast iron. These two brand names are the most sought after by collectors, and it is common for some of these pans to fetch hundreds of dollars. One of my new additions is a square skillet which boasts both names on the underside. According to my secret supplier of cast iron, this came about when Wagner in the 1950s tried to buy out Griswald; which resulted in the Griswald family informing Wagner thy made inferior cookware and the answer was NO. So Wagner formed a subsidiary company that then was successful in buying up the Griswald company in 1957. So from 1957-1960 while the use of the Griswald name was being decided in the courts, a small number of skillets and pans were cast with both names.

I know I really need to get a new hobby. Hahahaha

Is it good for you?

Researchers have found cooking in iron skillets increases the iron content of foods. Acidic foods generally have a higher moisture content, foods like applesauce and spaghetti sauce, were found to absorb the most iron. Meals cooked for more extended periods or in new pans absorbed more iron than food heated quickly.

How to season your pan? After a good cleaning to remove the factory or old coating, I set my new skillet on the stove top or in the oven on 3500, I add a tablespoon of olive oil and wipe the inner cooking surface and let the thin film of oil soak into the pores of the pan. 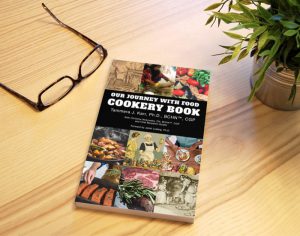 You can read more on cookware in Our Journey with Food Cookery Book!